Carolina Antoniadis was born in Rosario city, province of Santa Fe and from an early age arts started to exist in her life. The main reason was that her grandfather, Demetrio Antoniadis, was a Greek landscape painter. He came to Argentina, dwelt in Rosario and rapidly associated with the impressionists of the time. Demetrio knew pretty well how to convey his love and passion for arts to his family. Five years afterwards, the family moved to Buenos Aires.

“My first approach to painting was when I was a kid and I sat and stared at my grandfather’s paintings. When I decided to do art, I began to copy the atmosphere of my house. My mother was a daydreamer and her decorations covered the walls, furniture; there were screens with romantic motifs, gondolas and bucolic scenes.”

Confident in her beliefs, she booked in the Prilidiano Pueyrredón National School of Fine Arts and in 1984 she graduated as a Painting Senior Teacher. In 1985, Carolina attended at an Analysis and Artist Workshop seminar conducted by Luis Felipe (Yuyo) Noé, where she also met Enio Iommi. Both artists guided Antoniadis in her artistic career. From that moment on, Carolina began to exhibit her works in collective and individual bases.

“Without being completely aware of it, the universe of my childhood became part of me in a more conscious level, but that carried on disappointment and skepticism because it was utopian. Since then, my questions address beauty, absence and loss. What appears to be evident, prolific and excessive ornamentalism hides a skin that’s more vulnerable, melancholic and willing to persist.”

She focused on teaching in different public and private schools. From 1990 to 2001, Antoniadis worked as an assistant professor of the Skific Saltzman’s Clothing and Textile Chair in the University of Buenos Aires. Within the program, the students learn several methods of printing, a system of pattern composition, the history and development of the textile industry, the different body silhouettes for apparels together with the application of the cloth structure and its ornamental aspect.

Concurrently, between 1996 and 2003, she held the position as a Senior Lecturer in the third-year Painting class of the Prilidiano Pueyrredón National School of Fine Arts. As the Lecturer, she instructed new generations of students in the path of contemporary art.

She received the Scholarships for Artistic Creativity given by Antorchas Foundation twice and in 1999 she won the National Fund of Arts Scholarship.

In the year 2006, Carolina presented Reference Domus, her first retrospective exhibition in the Cronopios Room at the Recoleta Cultural Center. The artist’s paintings blended with the landscapes made by her grandfather Demetrio, the pictures of her brother Leonardo and the objects linked to her family history.

In the 2011, Jugendstil opened in the Del Infinito Art Gallery as a tribute to modernism, a movement that articulated arts and design. Icons of the everyday life were included in the exhibition as the basic materials –even pictures and objects were reused and transformed into art pieces.

Besides her pictorial works on canvas and the pottery objects, Carolina made street art interventions and large-scale murals. In 2011, she painted the Containing Molas mural in the Miraflores Mirador on the Panama Canal. Throughout 2013, she made an intervention painting big-sized illustrations on the Echeverría station at the subway B line and on the Vicente Querido Park in Olivos.

Currently, she lives in Buenos Aires, has a workshop located in Palermo district and works as a private teacher. Her pieces are represented by Del Infinito Art Gallery in Argentina and the Art Consult Gallery in Panama. They became part of different collections in and outside the country.

Download the PDF with the complete list of the artist’s exhibitions, awards and collaborations as a jury. 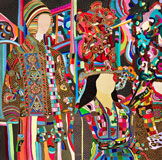